So you joined a weekly NFL office pool! We’re here to help. These pools can also be called NFL or Pro Football Pick’Em Leagues.

There are many variations of football pools, including:

This article will be to discuss the first variation and regular confidence pools. You can also check out our video.

What are Confidence Pool Picks?

Here are the rules for Confidence Pool picks. Each week the NFL has a schedule of games. If all of the teams are playing, there are 16 games. You have two jobs: 1) to pick the winner of each of those games and 2) to assign a rank (1 to 16) for each game according to how “confident” you are for the winner you’ve picked. If you are correct and the team you’ve picked wins, you get the amount of confidence points you assigned to it.

Let’s say the Chicago Bears are playing the Green Bay Packers. You have picked the Packers to win and you felt confident to have ranked them at 15 points. If the Packers win, you get 15 points. If the Bears win (or if the teams tie) you get 0 points. You do this with all the games for the week. At the end of the week, you add up all of your points and that becomes your total points for the week.

Most leagues offer payout prizes for top point totals for the week, and then award a bigger prize for total points for the season.

How do you pick which teams to win? And how many confidence points to assign to each game? The general answer is: you pick the team that’s most likely to win (highest win probability) and assign them 16 (or the highest point value). The second most likely to win is the second highest point value and so on until the team that is barely expected to win gets one point. This strategy will at least get you in the game and may even win you a week. 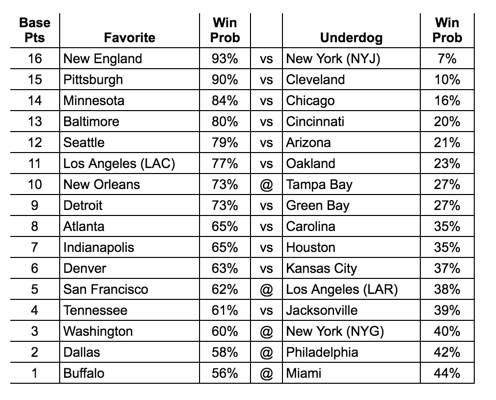 The Base Picks – Vanilla Ice Cream

We use betting data and convert it to a win probability to determine the base picks. We offer it to you for free! Sign up here to be notified when we post our free NFL confidence pool base picks.

The Money Picks – All the Flavors and Toppings

A good vanilla ice cream will get you in the game but it probably won’t win any ice cream contests. This is where you have to take some chances with toppings and other flavors. We call these the money picks — as they are the picks that will get you money. In most leagues, you’re in the money if you’re in the top three points for the week or for the entire season.

The money picks are teams that no one is picking but have a better chance than people think. We introduce the “percent picked” number to the win probability here. This number is the percentage of the general public that picked a team to win. For instance:

In this case, 99% of the people are picking New England to win. Makes sense since they have a 92% win probability.

For the money picks, we look for teams that have the highest win probability at the lowest percent picked number. Here’s an example: 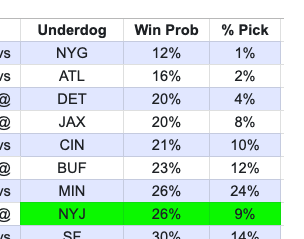 Out of the teams with percent picked under 10%, the New York Jets have the highest win probability at 26%. Even though 26% isn’t great, it’s not zero and will happen about once every four times. And if it happens, you beat all the people who didn’t pick them (in this case, 100%-9% or 81%).

Each week there are a few good money picks, sometimes much better than 26%. Usually they’re in the 20% to 40% win probability range. The lower the win probability, the higher the risk. How much risk you should take depends on how many people are in the league and if you’re going for the win for the week or for the season.

So back to our ice cream. If we just go with plain vanilla, we’re at least in the game and may even win. To go for the win, you have to take some risk and add some toppings. You want your toppings to be different but not weird. Ketchup and mustard are different but you’re not going to win any ice cream contests with it. Chocolate covered pretzels may be a winner. A chocolate covered pretzel and bacon is even riskier but may get you the win; if you have the right judges.

Our money picks will show you what ice cream toppings — chocolate covered pretzels and bacon (risky but could pay off) versus ketchup and mustard (risky but just not good)– may get you over the hump. You get to decide how much risk you want to take and which toppings to take it with. Here’s an example from Week 17 of last year:

The green teams are high risk/high reward money picks, while the yellow ones are less risky but also less reward. We actually have blue picks too, which are safer picks with some reward.

How to assign confidence points to money picks

To help your cause even more, you should assign a high confidence point to the money pick. That way, if you get lucky and the money pick wins, you’ll get the most bang for your buck. In the above case, you could pick the New York Jets for 16 points. Yes, it’s risky, but in the one in four chance you do win, you’ll shoot ahead of most other players. You’ll lose three out of four times but at least that one out of four will give you a good lead. If you don’t assign enough points to the money pick, you’ll be in danger of getting lucky and winning that game but will still not have enough points to win the week.

If you want to take even more risk, you can pick a second money pick and choose a high confidence point value for it too.

Here’s the example from Week 17 (this week doesn’t happen to have any blue picks): 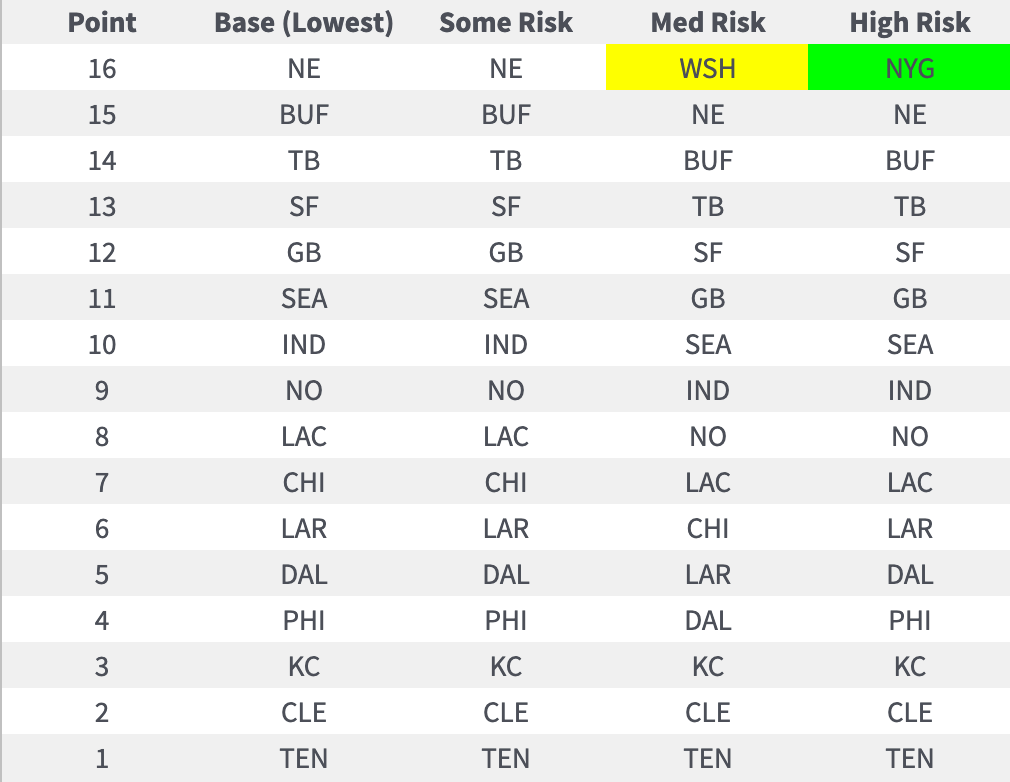 Use these picks as a guide. You can also slot in a different green pick, yellow pick or blue pick at the top. You can also pick a green and yellow combo to go at the top or two blues. It all depends on how you want to play it!

And there you have it! Best of luck this year, and join our email list for free base pick updates or sign up for our Premium membership for the money picks.